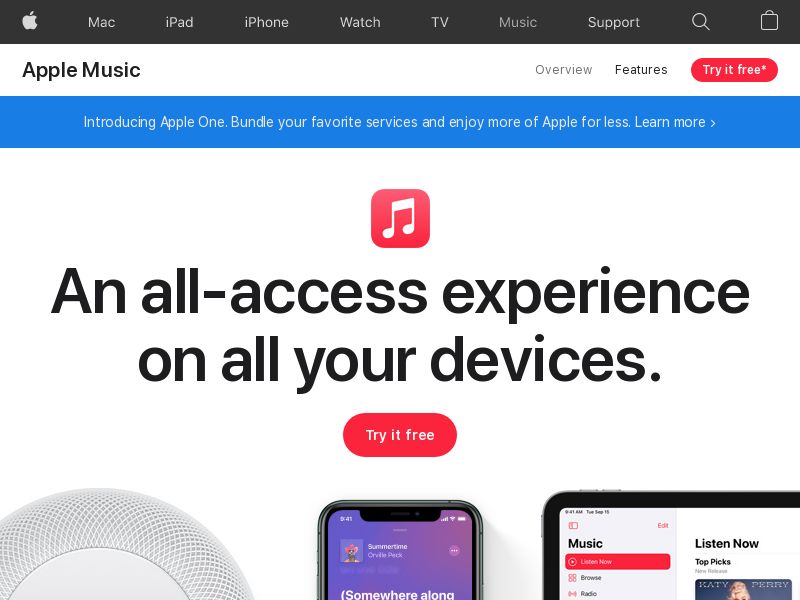 Apple Music is a music and video streaming service developed by Apple Inc. Users select music to stream to their device on-demand, or they can listen to existing, expertly curated playlists. The service also includes the Internet radio station Apple Music 1, Apple Music Hits, and Apple Music Country, which broadcasts live to over 200 countries 24 hours a day. The service was announced on June 8, 2015, and launched on June 30, 2015. New subscribers get a six-month free trial period before the service requires a monthly subscription.

Stream over 70 million songs ad‑free.
Download your favorite tracks. Play them offline.
Get exclusive playlists and live radio.
Listen across all of your devices.

Conversion occurs on the first months membership payment. No initial cost to the consumer but they must have valid payment info Devices: IOS and Android Devices with google play store support. on android devices users must install the apple music app via the play store and then input there apple id information. No incent, No Adult Traffic, No Brand Bidding, No Google Adwords/Facebook PPC IOS Flow: Preinstalled Apple Music app opens and user selects there membership type. They have one of three choices individual, family or Student. If their apple id already has a payment option associated to it they will be asked to select there artist and genres. This is the fastest version of the flow. If they do not have a payment type associated with there apple id they will have to add it then user will be redirected and asked to select genres and artist. Android Flow: User first gets redirected to google play store to download the apple music app. Once its installed the flow is the same as the IOS version. The biggest difference being that most android users do not have a apple id . User must have an apple id with a payment associated with it. If not they have to create an apple id and then add there apple id credentials to the apple music app. Afterwards they will select membership type then user will be redirected and asked to select genres and artist.